TAIPEI, Taiwan, November 26, 2015 – Last time ASRock dumbfounded the whole overclocking community by cracking the limitations of Intel® 8 series chipsets, granting users the power to overclock their CPUs on even H87 or B85 non-Z motherboards. Recently they've pulled off two more crazy features which allow overclockers to automatically overclock their DDR4 memory modules not only on Intel's Z170 chipset motherboards, but also on B150, H170 and H110 as well!

It all starts with an Easter egg feature named DDR4 OC, which only appears in the UEFI of ASRock's Z170 motherboards if the user has installed certain memory modules, such as Kingston or Samsung DDR4 DIMMs. It unlocks the hidden power of your memory sticks, unleashing the memory frequency from 2133MHz to max. 2800MHz, providing up to a 30% boost! 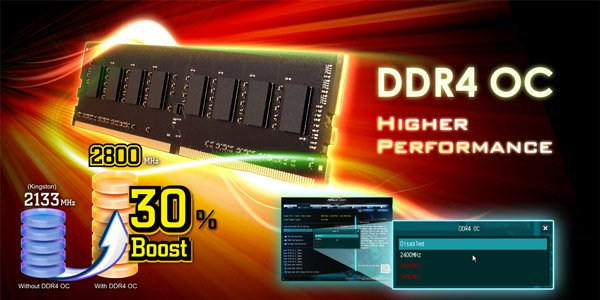 But what about all of those non-Z motherboards? Shouldn't they be entitled for a little bit of overclocking excitement despite the fact that Intel® prohibits this by implementing hardware limitations? ASRock's answer is yes! And they've actually worked sorcery to break the chipset limitations, so here you have DDR4 Non-Z OC as well, the automatic DDR4 overclocking feature for B150, H170, H110 motherboards that can improve the performance of your memory. 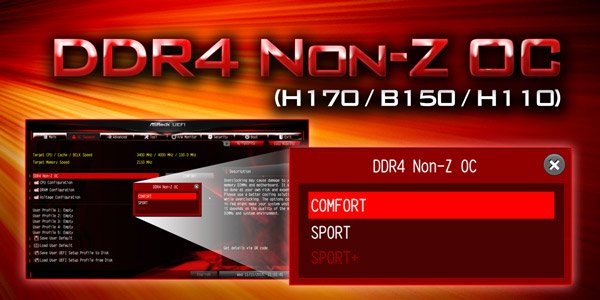 ↑The screenshots above illustrate the differences of the performance while DDR4 Non-Z OC is enabled or disabled. SiSoftware Sandra memory benchmark indicates a 5% memory performance boost on an ASRock B150 chipset based motherboard.

↑How do you know whether your memory modules are successfully activated and fully compatible with ASRock DDR4 OC or DDR4 Non-Z OC? The boot-up image smartly tells you what your system is capable of. The shiny and golden ASRock boot-up image will only appear after ASRock DDR4 technology is enabled.

Check out this video about DDR4 Non-Z OC:

And our video about DDR4 OC: