20 Years of Innovation and Goes on

TAIPEI, TAIWAN, May 24th, 2022 – ASRock, the leading global motherboard, graphics card and mini PC manufacturer, is celebrating the 20th birthday throughout whole 2022. Also, it announces to showcase the latest AMD and Intel® series motherboard, the graphics cards and small form factor PC on COMPUTEX DIGITALGO 2022 from May 24th to June 6th, 2022. Furthermore, ASRock's mascot, ARKY, will show up at the booth. Want to know more about ARKY? Visit our booth now. 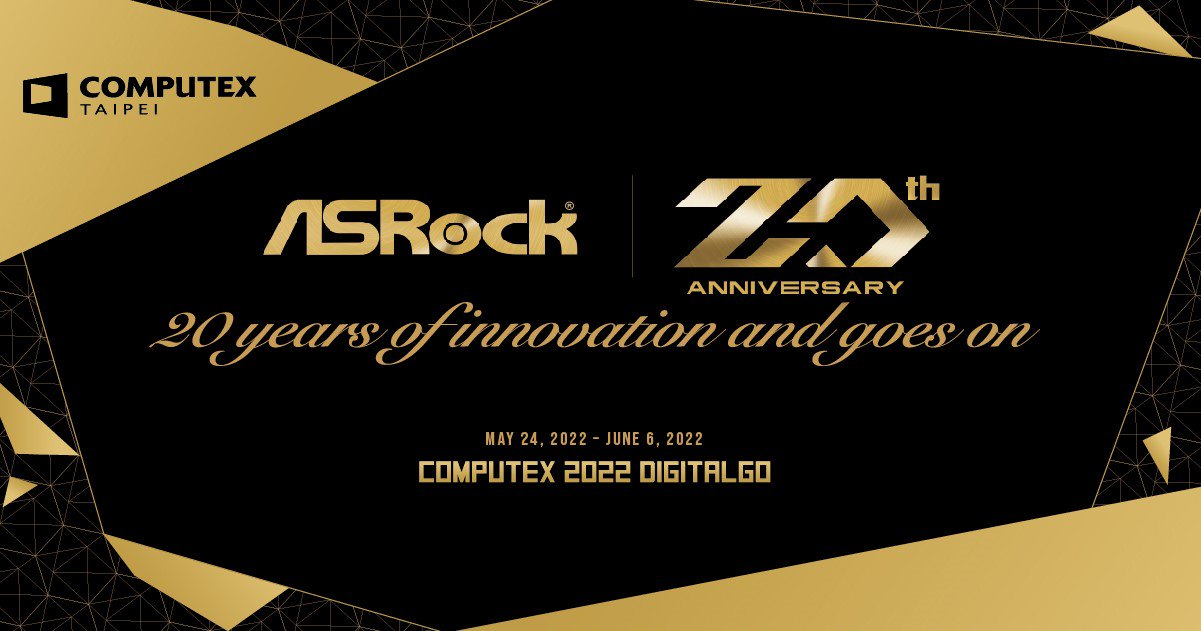 The long awaited AMD AM5 platform is finally debut! ASRock reveals a series of motherboard based on the revolutionary AMD X670 chipset including X670E Taichi, X670E Steel Legend for the high end and enthusiasts & X670E PRO RS for the mainstream.

The new motherboards are equipped with many exciting features and new technology such as PCIe 5.0 & DDR5 capability, the insane IO capability including the support of Thunderbolt 4.0 has pushed the X670 platform even further into high end desktop category, ASRock went all out on the VRM design too, with total of 26 phases SPS Dr.MOS design on the X670E Taichi, it is the most powerful AM5 product ASRock can offer, and on top of that, there's a special edition motherboard X670E Taichi Carrara to celebrate the 20th birthday of ASRock!

"The X670E Taichi Carrara is a special edition motherboard to celebrate the 20th Anniversary of ASRock, "Taichi Carrara" resembles the high strength as well as the esthetic of Carrara marble, they are also the key elements while developing this motherboard", Said Chris Lee, Vice President of ASRock motherboard business unit. 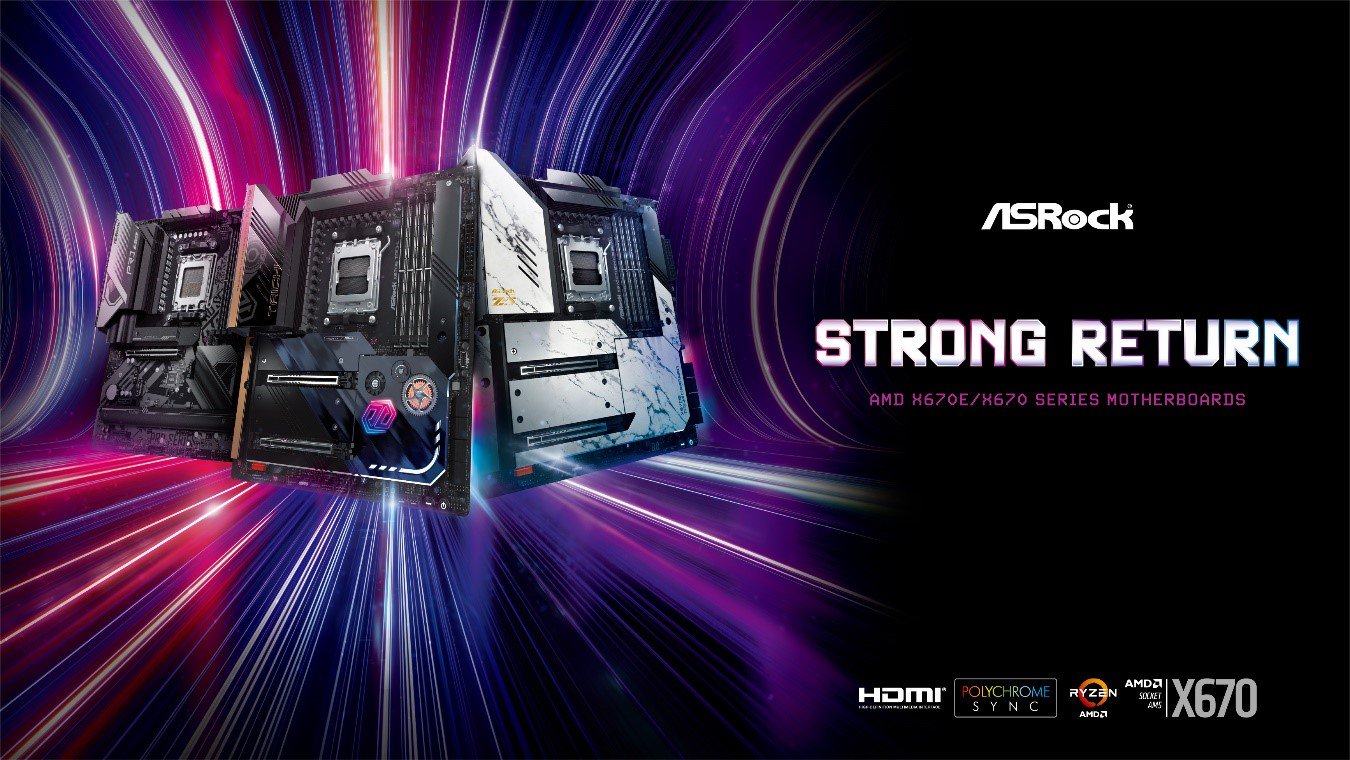 ASRock also announces a selection of fascinating new motherboard such as B660/H610M-ITX/eDP, a whole new concept of customization by allowing an actual monitor panel can be mounted on the side of the computer chassis, ASRock is now working closely with chassis manufacture such as, Cooler Master, InWin, Thermaltake and Silver Stone to make this revolutionary concept happen, opens up countless possibility to personalizing your own PC. 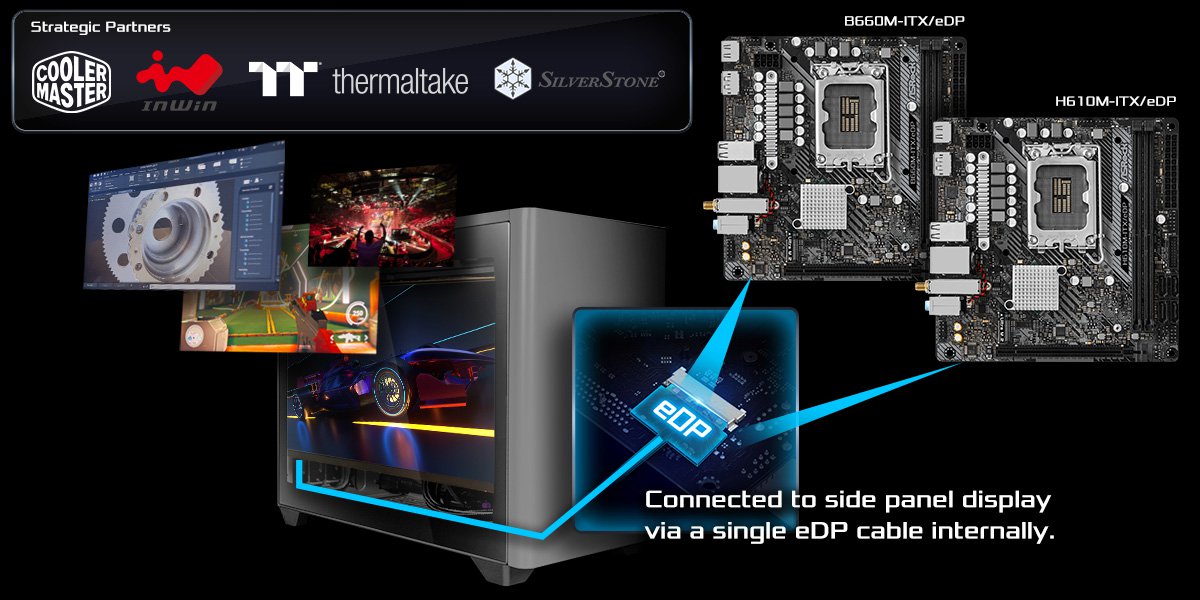 DeskMeet series and DeskMini B660 series are available right now

DeskMeet series and DeskMini B660 series launched at the beginning of year are available right now. With only 8 liters of volume, DeskMeet series are powerful and compact desktop PC designed to deliver the best experience for daily computing, gaming, home entertainment, content creation and business. DeskMeet B660 features 12th Generation Intel® Core™ processors, while DeskMeet X300 supports AMD Ryzen™ 5000 Series desktop processors, 4 DDR4 U-DIMM slots and the dual slot graphics card under 20 cm long. This portable PC can stand either vertically or horizontally to fit into any workspace for various applications.

DeskMeet series includes an internal 500W 80 Plus Bronze ATX power supply with custom length cables to make cable management easier. The fan in the power supply will draw in the cool air to CPU cooler which is the best way to increase airflow and ensure DeskMeet operates at its utmost efficiency of heat dissipation. DeskMeet series adopts a drawer chassis design and has flexible expandability, so users can configure or upgrade all the components with ease to meet their now and future needs. Brand new DeskMeet series is the best choice for the Mini ITX PC market.

DeskMini B660 series features Intel® B660 chipset to pair with latest 12th Generation Intel® Core™ Processors. It also brings faster USB ports and M.2 SSD slots than the previous series. DeskMini B660 series is equipped with reversible USB 3.2 Gen-2x 2 Type-C ports in the front panel, providing an extreme 20Gb/s transfer rate and one M.2 slot which can support the latest PCI Express 5.0 standard to load all of your apps and programs with lightning speed.

Up to four video outputs can be used simultaneously for productivity, multitasking and immersive gaming experience. ASRock has gathered all optimum specs that you can imagine into this little monster. 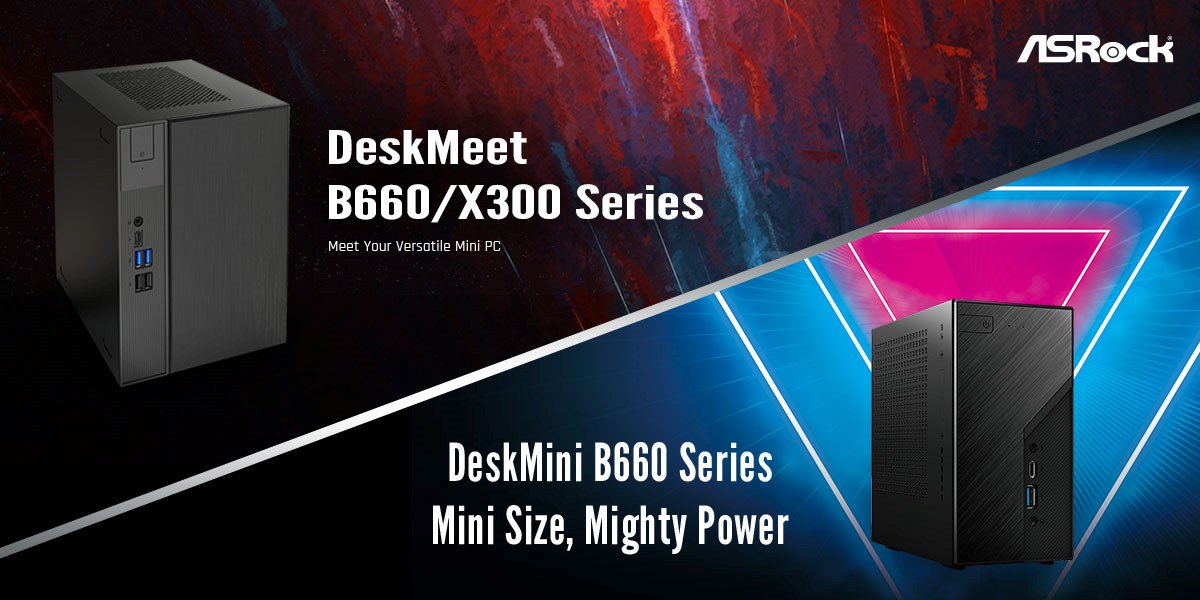