TAIPEI, Taiwan, March 08, 2012 – World's Top3 motherboard maker, ASRock Inc, presented its multidimensional products at CeBIT 2012, including a wide range of motherboard, HTPC and IPC mobo series. For AMD section, the most shining motherboard would be the A75 Pro4/MVP. This is the first AMD motherboard supporting Lucid Virtu Universal MVP™ technology in the world. It allows gamers to take advantage of this new technique and enjoy the amazing performance boost from HyperFormance™ and Virtual Vsync™.

Fast response is incredibly important in games. ASRock is all excited about its brand new achievement in the field of graphics enhancement. ASRock A75 Pro4/MVP motherboard supports Lucid Virtu Universal MVP™, is optimized to make your PC look better, respond faster, process video and media smoother, all within a lower power environment. Major features include :

1.HyperFormance™ : A new technology which combines integrated and discrete graphics for uncompromised performance and improves gaming frame rates 30-70%. Special highlight here is that HyperFormance is also supported with both ATI™ and NVIDIA® graphics cards. 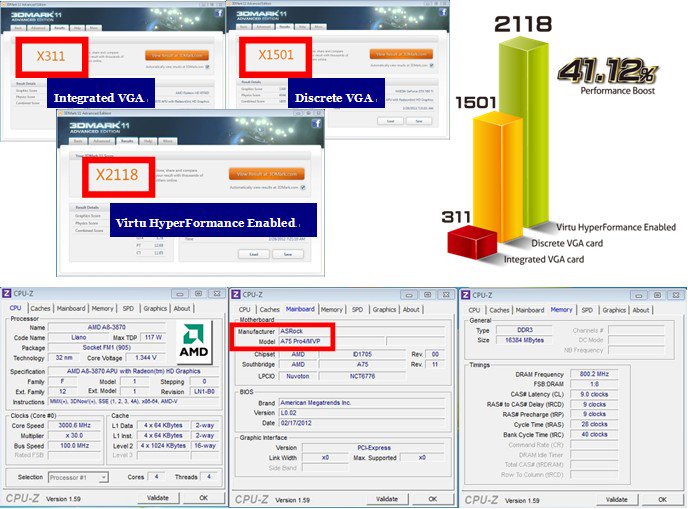 2.Virtual Vsync™ : A technology designed to solve the ever lasting debate between quality and performance. Bring GPU performance from 60 FPS Vsync limit back to its maximum while keeping Vsync image quality and no tearing.

3.Switchable Graphics : Dynamically assigns tasks to be the best graphics resource regardless of physical cable connections.

The soon-to-be-released A75 Pro4/MVP motherboard may not be the best of the plethora of A75 APU motherboards around but it just goes to show that you don't need the most expensive board to get serious performance. If you are an eagle-eyed user looking for the exciting technology, never forget to come to experience the new wonder of ASRock CeBIT 2012 (Hall 17, C32)!