890FX Deluxe3 is an AMD 890FX–based release, with a compact design and exceptional performance! As the global leading motherboard provider, ASRock sets the highest standard of building its first 890FX motherboard – 890FX Deluxe3. Exclusively integrated with an ASRock unique UCC chip, this board is able to support the UCC [Unlock CPU Core] function in BIOS which helps you to upgrade your CPU cores from X2/X3 to X4 and even from X4 to X6 effortlessly. Keep the customization business concept in mind, ASRock 890FX Deluxe3 is designed on the basis of brining zero-cost upgradeability and the unparalleled computing performance!

Carried with AMD 890FX + SB 850 chipsets, 890FX Deluxe3 provides the 8 X SATA3 (6.0 Gb/s) ports ( 6 from SB850, 2 from Marvell), USB 3.0 (5.0 Gb/s) from the industry-leading NEC manufacturer, and eSATA connector is also available on the real I/O. As a lineup of True333 series motherboard, 890FX Deluxe3 can also satisfy you by the faster data transfer speed, storage capability and true computing experience. 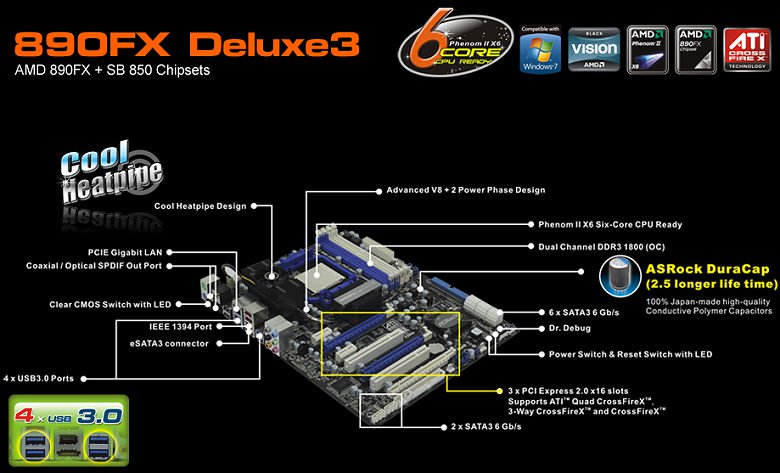 Output quality is the key strength in ASRock 890FX Deluxe3. This board adopts 100% Japan-made high-quality conductive polymer capacitors which can extend the motherboard life to at least 2.5 longer. Exclusively equipped with the Cool Heatpipe Design, 890FX Deluxe3 can dissipate heat from CPU power mosfet and northbridge rapidly and make your system running much cooler. If you make the settings in default mode, the Cool Heatpipe fan will be running at the most appropriate speed to reduce the noise automatically. If you were the extreme gamer, don't worry, you may tune the Cool Heatpipe Fan running speed in BIOS to match your most desired settings as well! For memory aspect, it supports dual channel DDR3 1800(OC) non-ECC, un-buffered memory, with max. capacity up to 16GB. For extreme gaming enthusiasts, 890FX Deluxe3 provides 3 x PCI Express 2.0 X16 slots that could apply ATI™ Quad CrossFireX, 3-Way CrossFireX and CrossFireX. The rear panel includes connectors for 7.1 ch HD audio (VIA® 2020 audio codec with Premium Blu-ray audio support), Coaxial/Optical SPDIF output port, clear CMOS switch with LED, IEEE 1394 port, eSATA3 connector and even available for 4 x NEC SuperSpeed USB3.0 ports.

Unlock CPU Cores, Get the Instant Performance Boost and Energy-Saving Overclocking!
Your All-in-one Solution Only with ASRock Turbo UCC Technology! 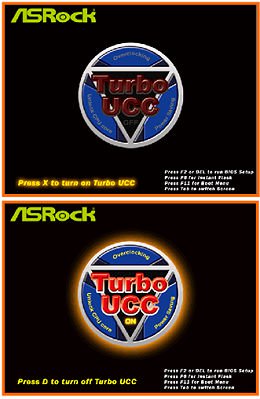 The ASRock Turbo UCC function literally tells you what it is capable of. ‘Turbo' means the auto-overclocking function which allows you to get the instant performance boost effortlessly. 'UCC' undoubtedly refers to the unlock CPU core function that helps you to upgrade your CPU cores. And the new Turbo UCC function is just the magic combination of these two functions and even brings you one most important key point that is energy-saving feature!

Turbo UCC technology, exclusive from ASRock, can provide you an all-in-one solution to unlock the hidden cpu cores in the CPU, get the amazing system performance boost by auto-overclocking, and running the system in a certainly lower power consumption level as well. When you press "X" when switch on the computer, the system will automatically reboot itself, after that, the system will execute the Turbo UCC function. Enabling Turbo UCC, it will automatically help you to unlock the extra CPU core to enjoy an instant performance boost, and the system performance will boost up by overclocking CPU frequency, memory frequency and all related voltage settings!

Many people will think that it is normal for the high-energy consumption for overlocking or system upgrading process. However, ASRock is now providing something different for you. Our newly Turbo UCC can allow an energy-saving overlocking and CPU upgrading process. As such, ASRock exclusive Turbo UCC technology can satisfy you not only with the ultimate computing performance as well as an energy-saving computing operation!

Featuring a unique UCC chip which enables the processor's hidden cores, 890FX Deluxe3 allows you to enjoy an instant boost and surely "Free" CPU upgrade benefits! ASRock UCC technology revamps a new standard of CPU upgrade revolution. Just a simple switch of the BIOS option ‘UCC', users can unlock the extra CPU core to enjoy an instant performance boost! Enabling the UCC feature in BIOS, the CPU cores might be upgraded from X2/X3 to X4, X4 to X6, and even some of the CPUs could increase L3 cache size up to 6MB. From performance level to entry level of AMD and NVIDIA® motherboards, ASRock has successfully integrated the UCC function onboard! This boost in CPU upgrade will enable unprecedented improvements in the user experience for all series motherboards! (*The success rate of this enhancement depends on the individual CPU.) 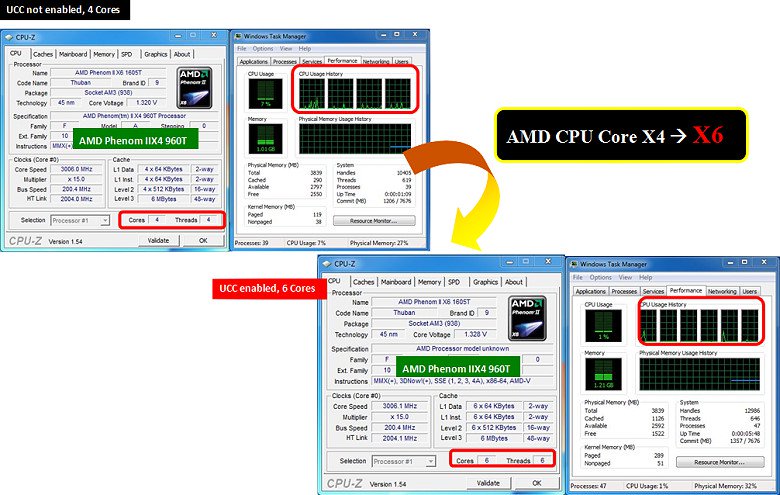 890FX Deluxe3 is also belonging to ASRock True333 Series Motherboard. It delivers awesome features for bandwidth-hungry users including faster data transfer speed and better storage capability. Utilizing the world's best-known computer peripheral interface – SuperSpeed USB3.0 supplied by industry's leading NEC manufacturer, this board is able to assured users to experience the zero-barrier data transfer computing environment. ASRock True 333 Series Motherboards provide the unparalleled performance with the onboard acceleration of the latest SuperSpeed USB 3.0 (5 Gb/s) technology from NEC with advanced 10X faster speed than USB2.0 device; SATA3 technology from Marvell with up to 6Gbps data transfer speed, and the most convenient connectivity of eSATA3 devices, this series will be the outright performance leader of its class.

Turbo60, a newly record-breaking technology from ASRock, is able to offer the performance boost up to 60%! ASRock 890FX Deluxe3 provides you everything needed for a system performance. Simply click the Turbo 60 button in BIOS, the system performance will boost up to 60% increase by automatically overclocking CPU frequency, Memory frequency and all related voltage settings! Boost your PC for free? ASRock 890FX Deluxe3 comes with exclusive Turbo UCC, UCC, Turbo 60 and True333 technologies that provides you an all-rounder motherboard solution! (Note: The overclocking performance depends on the system configuration you adopt. We do not guarantee the overclocking performance.)

There's always something fabulous going on at ASRock site. Get the details of what's about to happen in our essential news and event listings now!