TAIPEI, Taiwan, August 29, 2014 – We have been here before, haven't we? Back in the days when we were used to having X79-chipset based motherboard for building up the supercomputers, and setting up the incredible rig on the face of earth, a brand new chipset motherboard with unassuming power came along and changed everything. It is ASRock's Super Alloy X99 motherboard series. The long-awaited X99 gears based on Haswell-E architecture were born today, including the prestigious Extreme Series, gamers' most wanted Fatal1ty Killer Series and crazy Nick Shih's Overclocking Series. 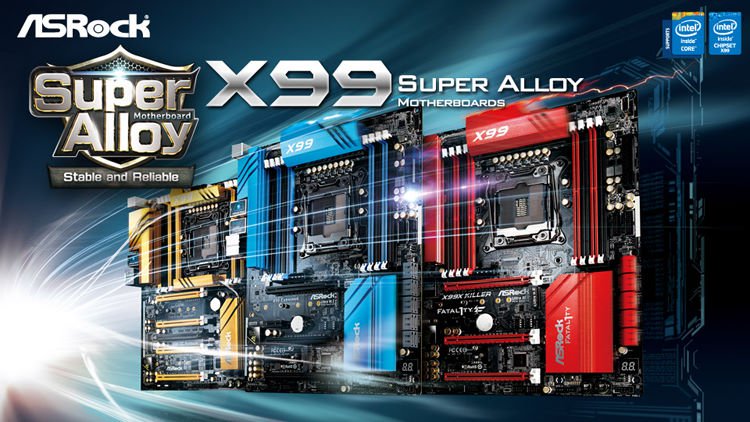 To identify the flagship motherboards among the three product lines, that would be X99 Extreme6, X99 OC Formula and Fatal1ty X99 Professional. Using out of the world to describe ASRock's top-end motherboards X99 OC Formula and Fatal1ty X99 Professional is actually an understatement. Two motherboards boast a whopping 12 Power Phase Design with 24 Dual-N MOSFETs, which can reach up to an unearthly 1300W support! In addition, two boards are equipped with dual M.2 sockets to satisfy more demands, one Ultra M.2 PCIe Gen3 x4 slot for experiencing the fastest M.2 performance and one M.2 PCIe Gen2 x4 & SATA3 socket for users who would like to equip dual M.2 devices.

In addition to above-mentioned motherboards, most of ASRock X99 boards adopt 12 power phase design for delivering smooth power with the lowest temperature, so that users may overclock and squeeze out every drop of performance effortlessly. Moreover, ASRock created 10 new gears based on X99 chipset that are equipped with Thunderbolt AIC connector, supporting the shockingly fast and revolutionary Thunderbolt™ 2 technology. To meet the server-grade configurations, new mainboards are all fully compatible with DDR4 Quad-Channel ECC* and UDIMM/RDIMM memory technology, supporting maximum capacity up to 128GB. The next-gen Ultra M.2 not only offers the world's fastest PCIe Gen3 x4 32Gb/s speed but also able to adopt SATA3 6Gb/s interface M.2 devices. Plus, ASRock Cloud Service offers 1-year FREE USD$49.99 Orbweb.ME professional subscription, making your mobile devices to be connected to PC anytime, anywhere.

ASRock is also thrilled to release its all-rounder server-grade X99 motherboard named X99 WS. This motherboard is equipped with Server-Grade Power Design (All Switching), one set for transferring 3.3V voltage to 1.5V, the other one for 3.3V to 1.8V, delivering improved power efficiency compared to linear design. Ultra Thin Design allows this board to fit in server-grade 1U chassis standard. The back of motherboard is all mounted with ultra short screws and the length of CPU back plate is less than 3mm. And the Intel® Dual LAN (I217LM and I210AT) low-power gigabit network controllers support Windows® server OS and can be used for server and workstation system configurations. Users can also enjoy the completely PCIe Gen3 speed 4-Way SLI/CrossFireX at x8/x8/x8/x8 mode. If you want maximum power and rock-solid performance, you should look no further than this X99 WS.

As usual, an awesome motherboard dedicated for gaming deserves ASRock Fatal1ty & Killer Motherboard Series unleashed today to satisfy most of gamers' wants and needs. At the same time, the motherboard uses Killer LAN networking chip, serious players may game carelessly with no lag, just frag! What's more, the Killer motherboard series is also the only motherboards supporting cloud service in the world.

The trustworthy Fatal1ty Series motherboards shall be received numerous hardware perks with the code name Gaming Armor, designed for improving the system's performance and stability when gaming. There's also the whole Purity Sound™ 2 onboard audio solution and gamers' much-anticipated Nichicon 12K Fine Gold Audio Capacitors for the pickiest ears, and the ultimate keyboard and mouse enhancement utility Key Master. And how could anyone forget the best live broadcasting and streaming tool XSplit Broadcaster & Gamecaster, we are giving away the USD$24.95 three month premium license for FREE again with the Fatal1ty/Killer Series!