TAIPEI, Taiwan, September 23, 2014 – How can you speak in defense of Intel® X99 chipset's performance without setting up a robust build and push it to the limits with extreme voltages? Until now, you couldn't, but over the weekend ASRock has done it by breaking another world record. The undisputed overlord of overclocking, Nick Shih has managed to overclock an Intel® Core™ i7 5960X (Haswell-E) on ASRock X99 OC Formula to 6620.73 MHz, placing him numero uno on HWBOT! 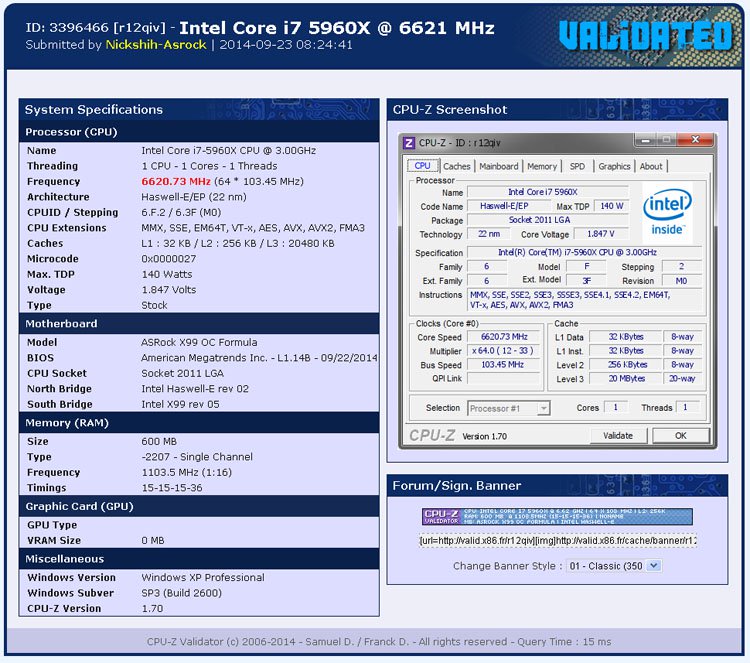 The CPU-Z screenshot above shows Nick Shih's unbelievable achievement – starting off with an Intel® Core™ i7 5960X at 3.00GHz and sky rocketing to 6.62GHz on ASRock X99 OC Formula! (CPU-Z Validator: http://valid.canardpc.com/r12qiv) 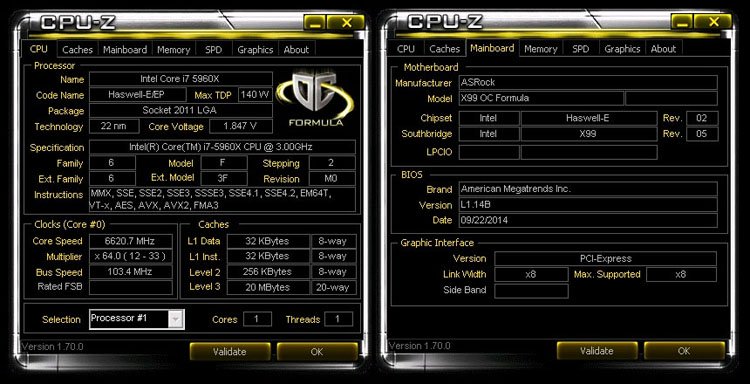 X99 OC Formula is composed by a 12 power phase design and 24 Ultra Dual-N MOSFETs, so it can support up to an amazing 1300 watts. 5 PCIe Gen3 x16 slots for stunning graphics with either 4-way SLI or 4-way CrossFireX. Plus it has two built in M.2 connectors, one that runs by PCIe Gen3 x4 and the other by PCIe Gen2 x4 & SATA3 for up to 32Gb/s file transfer speeds. Furthermore, this new star of ASRock's OC series come with the renowned Power Kit, Connector Kit, Cooling Kit, Monitor Kit, and of course the exclusive water proof ASRock Conformal Coating just like the rest of the family. Lastly, even if you're a newbie lacking experience in overclocking, X99 OC Formula comes with Nick Shih's overclocking presets, so that any user can learn and become a pro too! Specifically tailored for extreme overclocking, this motherboard is like a powerful beast on rampage, are you ready to tame it and set records?

For detailed information about this motherboard, please check:
http://www.asrock.com.tw/mb/Intel/X99%20OC%20Formula/