TAIPEI, Taiwan, January 4, 2013 – The global leading motherboard brand ASRock announced today to organize ASRock FM2 OC Competition with HWBOT, the top organization hosting the world's only 24/7 overclocking competition to bring together 35,000 participants and feature competitions in thousands of categories. The participants will be competing for the highest CPU-Z or 3DMark Vantage score which is submitted to HWBOT.org. 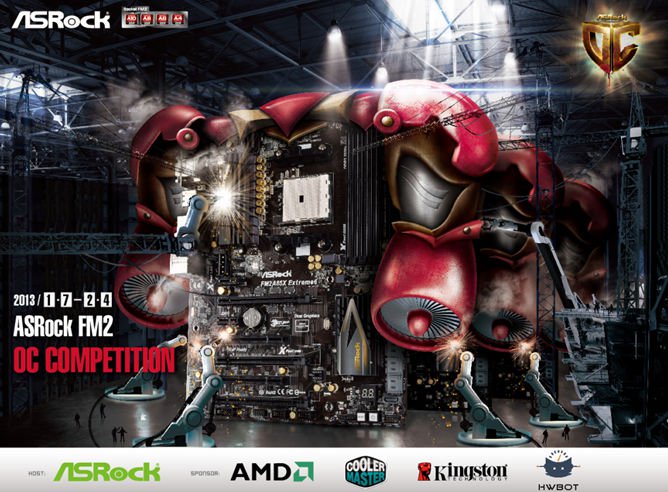 The contest, sponsored by several prestigious brands including AMD, Kingston and Cooler Master, starts from January 7 and runs until February 4. It is opened to all overclockers with ASRock brand motherboards and AMD Socket FM2 CPUs. The total prize is worth up to 6,740 dollars and the final champions of the CPU-Z and 3DMark Vantage event will be awarded with a top prize worth of 2,170 dollars respectively. The grand prize makes it one of the most eye-catching online OC competitions on FM2 platforms, which is estimated to attract enthusiastic overclockers worldwide.

ASRock FM2 Series motherboards features the exclusive auto overclocking function X-Boost. By enabling X-Boost users may get an extra 15.77% performance boost by one click! The flagship model FM2A85X Extreme6 has earned at least 12 IT awards around the globe since its debut in October, 2012. One of the most prestigious awards came from the Global IT authority Tom's Hardware, in which FM2A85X Extreme6 won Approved Award for standing out in the "Six Socket FM2 Motherboards For AMD's Trinity APUs" review. ASRock welcomes global overclockers to participate in the FM2 OC Competition and experience the ultimate overclocking capability of ASRock FM2 motherboards!

The contest includes two events: CPU-Z or 3DMark Vantage. The scores will be reviewed on a weekly basis and the highest scores will be the weekly winner. The participant who submits the highest score within these four weeks will be the final champion for each group respectively. The CPU-Z and 3DMark Vantage final champions will be awarded with prizes worth USD2, 170 dollars respectively. Besides, ASRock offers an extra USD1,000 cash prize for the entry that breaks the world record of the CPU-Z or 3DMark Vantage test to encourage global overclockers to challenge Nick Shih's scores.