Ultra fast, ultimate performance & enhanced components – ASRock True 333 (USB3.0, SATA3, eSATA3) series motherboard unleashes the most advanced technology at CeBIT 2010! Highlights of this year's CeBIT Show, ASRock is going to showcase our latest Motherboard solutions, NetTop Core 100 series and MultiBooks! Take a look of our new collections at CeBIT 2010 in Hannover, Germany, March 2nd to 6th at Hall 17, Stand C50 and you will be amazed even more pleasure!

February. 26, 2010, Hannover, Germany – A coming wave of PC: pursuing the faster data transfer performance and storage capability, usher in a new era of extreme-speed computing. But have you ever experienced the true computing? ASRock, a global leading IT brand, struggles to provide the breakthrough well-rounded solutions for users to experience the real speed computing at the world's famous IT technology tradeshow, CeBIT 2010 in Hannover, Germany, from March 2nd to March 6th at Hall 17, Stand C50. The best new hardware and software will be showcased during the show, including: motherboards, NetTops, MultiBooks and more. All you have to do is just come to ASRock CeBIT 2010 show, and you will be assured in the know!

Today's motherboards hardly resemble the real computing. Whatever your reason for needing a faster system, we've got a host of technologies to improve your computing experience. The ASRock True 333 onboard motherboards born to bring the truth and sets an exactly true computing standard by combining the world's highest speed transfer technologies. As the industry's leader, ASRock is keen on providing the most demanding technology and has once again proof its innovative capability by True 333 series mainboards. ASRock True 333 series motherboards deliver the unmatched performance with the onboard acceleration of the latest USB3.0 (5Gb/s) from NEC with advanced 10X faster speed; SATA3 technologies from Marvell with up to 6Gb/s data transfer speed, and the most seamless connectivity of eSATA3 devices. 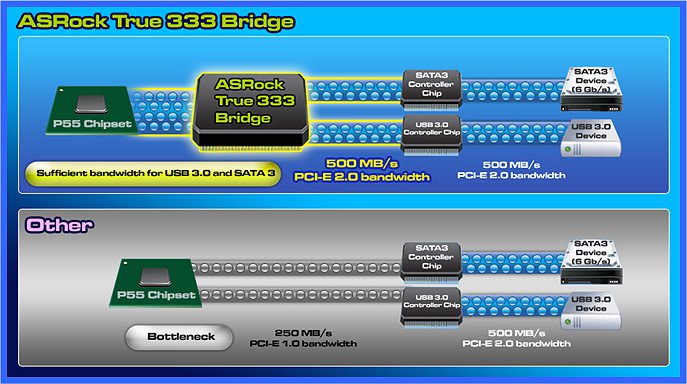 Do you desire for the free upgrade? Of course, you do! Different from the traditional AMD motherboard, ASRock 890GX Extreme3 makes a new definition of how a motherboard will be used! It is a new upgradeable motherboard usage that users enable the ASRock UCC (Unlock CPU Cores) feature in BIOS, and the CPU cores could be upgraded from X2/X3 to X4. ASRock UCC simplifies AMD CPU activation. Just a simple switch of the BIOS option ‘UCC', you can unlock the extra CPU core to enjoy an instant performance boost. Additionally, some CPU can even increase L3 cache size up to 6MB. Not only on AMD 8xx series motherboards, we implement the UCC feature on entry Nvidia N68 series motherboards as well. It is also the World's First Nvidia Chipset motherboard supports "Unlock CPU Core"!

(Please be noted that UCC feature is supported with AM2+ / AM3 CPU only, also, not every AM2+ / AM3 CPU can support this function because some CPU's hidden core may be malfunctioned.)

At ASRock, we do not merely pursue excellent – we also strive for the absolutely perfection in everything we do. In fact, our efforts have been recognized in the form of numerous professional media accolades! Currently, H55M Pro was proudly received The Most Recommended H55 MB from Tom's Hardware Guide (THG), and was honored as the Best Recommended Motherboard by the AnandTech System Buyers Guide. Combined with ASRock exclusive Turbo 50 technology and ASRock H55 motherboard, your system performance will be increased up to 50% effortlessly. At CeBIT show, you can see the full ranges of ASRock H55 platform motherboards! Come to the show and check out by yourself!

In addition to the outstanding motherboards, ASRock is proud to release our latest Core 100 HTPC Series at CeBIT 2010. With the intention to present an affordable and functionable HTPC product to users, ASRock announced all series of Core 100 series which includes Core 100HT-BD, Core 100HT and Core 100. Utilizing Intel® Core™ i7 / i5 / i3 and Arrandale-based processors, Core 100 series features Intel® HD Graphics that offers great FullHD 1080P performance and energy-efficient capability. Plus, it is the world's first USB3.0 onboard HTPC on the market. Another "Must-Have" for users to experience is the industry's highest level of True Blu-ray Video and Audio which can provide you "better than cinema" audio quality and stunning movie experience! 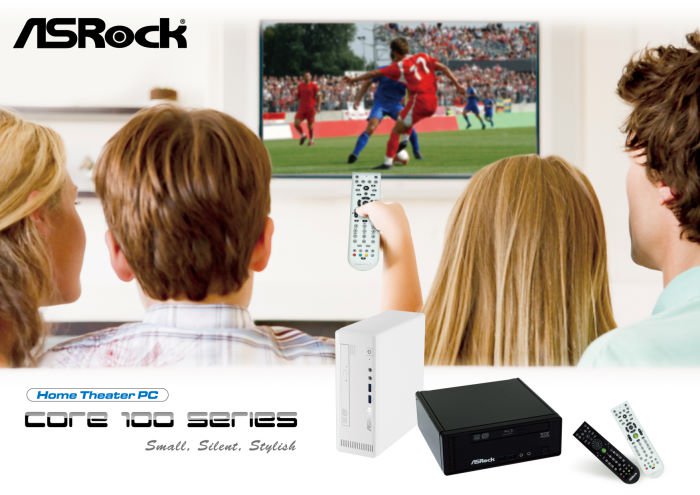 Mobility is Everything – MultiBook M25 / F24

Another great product line is our MultiBook section. In this event, we're going to demo our latest MultiBook M25 and F24. M25 is a 15 inch notebook and F24 is a 14 inch one that both come with exquisite features and affordable price. ASRock MultiBook M25, adopts the latest Intel® Core™ i5 processor and NVIDIA® GeForce® GT 330M MXM card that delivers solid performance for 3D games and everyday applications. ASRock MultiBook M25 & F24 come with excellent specifications and features, such as ASRock Multi-Touch trackpad, 802.11b/g/n wireless LAN, Bluetooth, HDMI, Powered eSATA/USB connector, 16:9 widescreen HD Glare Type LCD, 1.3M camera, and Full-size keyboard with numeric key. Multi-Touch trackpad allows you to maneuver your notebook tasks with simple gestures. Just enjoy scrolling up and down a webpage, zooming in and out an image, back or forth through browsing on the web by finger dancing with ASRock Multi-Touch trackpad.

With a vast collection of product solutions, covering from motherboards, NetTops and MultiBooks, CeBIT visitors will gain insights into ASRock cutting-edge technologies with a wide range of futuristic technologies being showcased. After having a first look at all above ASRock new products, I suppose you'll desire to know the whole show. Just visit ASRock CeBIT2010 tradeshow and you will be in the front row of IT trend! Trust us! Come to ASRock CeBIT2010 and you will be stunned by our superb hardware components, system performance and find out even more pleasure!