Ready for 990FX Extreme9? ASRock has Saved the Best for the Last!

TAIPEI, Taiwan, January 14, 2013 – The industry's leader of motherboard manufacturing, ASRock has announced today the debut of its most deluxe motherboard of the AM3+ Series – introducing ASRock 990FX Extreme9. Even though packed with the same chipset, this motherboard has added multitudes of features to stir up anticipation for the AMD product lines. Features such as premium gold caps, rock steady power phase design, top notch Intel® gigabit LAN solution and also the ASRock exclusive X-Boost for easy and efficient overclocking. 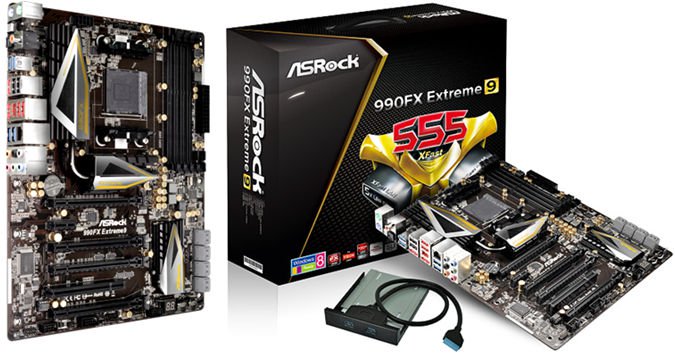 The memory includes dual channel DDR3 DIMM slots that support up to 2450 MHz when overclocked. Another 4 PCIe 2.0 x16 expansion slots for supporting NVIDIA® 3-Way SLI and AMD 3-Way CrossFireX technology, so users may immerse themselves in mind blowing graphics. As for LAN, ASRock 990FX Extreme9 promises to offer the best internet experience with Intel® 82583V Gigabit LAN. With the 7.1 CH HD audio by Realtek ALC898, audiophiles won't be disappointed either. Storage devices and other peripherals are more than welcomed with the 8 SATA3 and 8 USB 3.0 ports, and with the free bundled ASRock exclusive front USB 3.0 panel users may connect two USB 3.0 devices and also find enough space to install 2.5 inch HDDs or SSDs. Moreover, the High density power connectors reduce over 23% power loss and also lower the pins' temperature by 22 degrees Celsius.

If you're thinking that ASRock 990FX Extreme9 has hardcore hardware specifications, then wait till you hear about the rich software support it has to offer. The ASRock exclusive X-Boost technology allows anyone to overclock their computer by merely hitting the X key during POST, the system is automatically unleashed with up to 116% performance boost!

Other software surprises include the exclusive XFast 555 technology for 5 times faster USB/LAN/RAM speed; the amazing Fast Boot for ludicrous 1.5 second Windows® 8 log in and it will boot up so fast that you will definitely need "Restart to UEFI" to enter the UEFI setup page; ASRock Dehumidifier to prevent dampness, Easy RAID Installer, etc.

Were you patiently waiting for the dream motherboard with cool specs and rich features? If so, we have saved the best for last with ASRock 990FX Extreme9. Let the sturdy components, overwhelming performance and futuristic design change your computing style!

For more information about the product, please go to: https://www.asrock.com/mb/AMD/990FX%20Extreme9/